skip to main | skip to sidebar

I think it is safe to say that Marty Boy had a pretty good 2nd birthday.  Last year we didn't do much - just a little get-together with my family at my parents' house where we had some cake and ice cream.  It was strawberry shortcake because Marty loves strawberries, and we just kept it simple.  And I'm glad we did it that way.  This year, we made a much bigger deal of the whole thing.  In true "Rachel" fashion, I wanted it to be a birth week, but the only real big thing we did before the actual day was decorate the Christmas tree.  To be honest, he redecorated the dang thing every day it was up, so that festivity was a never-ending one.﻿ 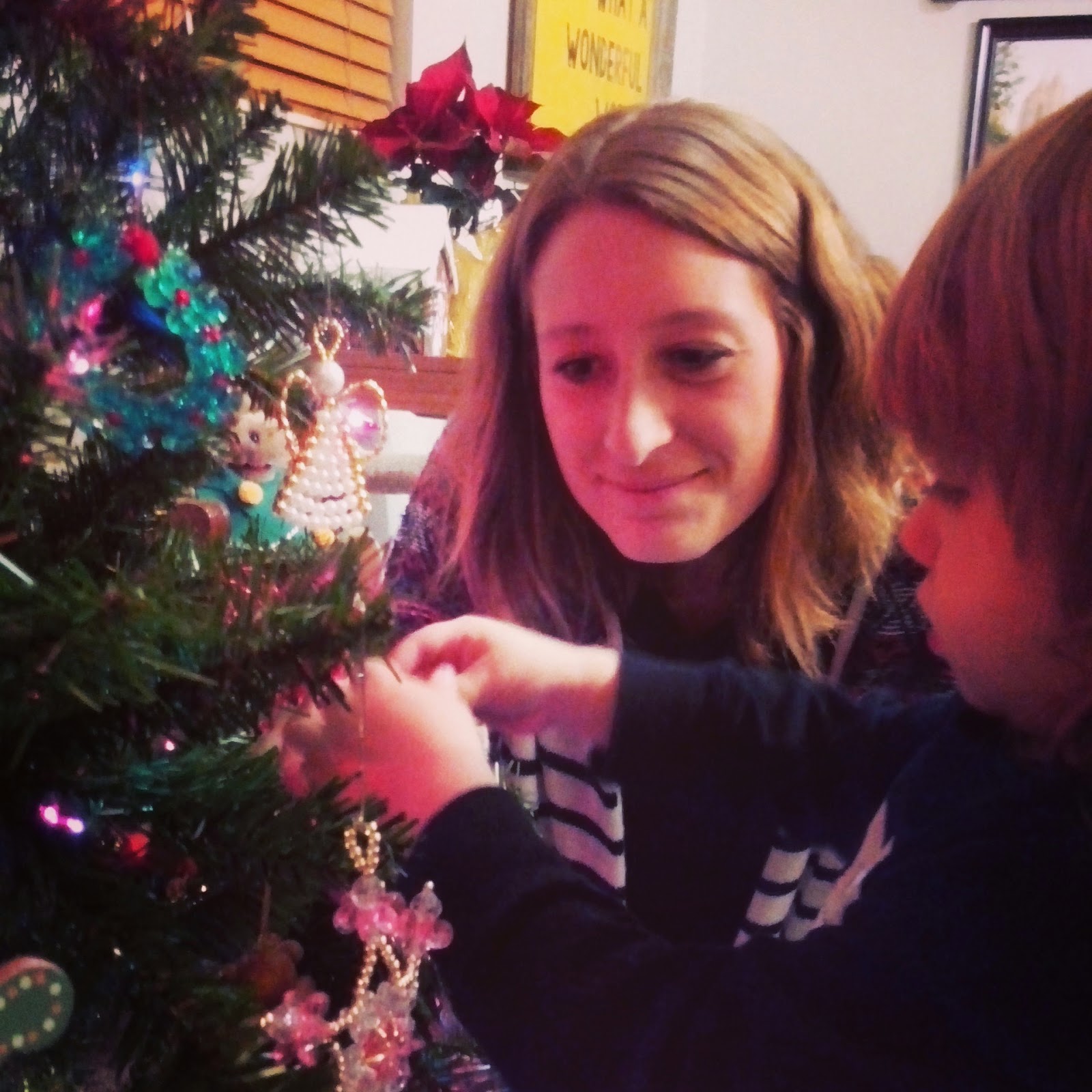 The actual day fell on a Friday that Richard had to work, but he planned to take the second half of the day off to celebrate.  So while he was at work, I let Marty start the day exactly how he wanted to, watching a movie with his truck.﻿ 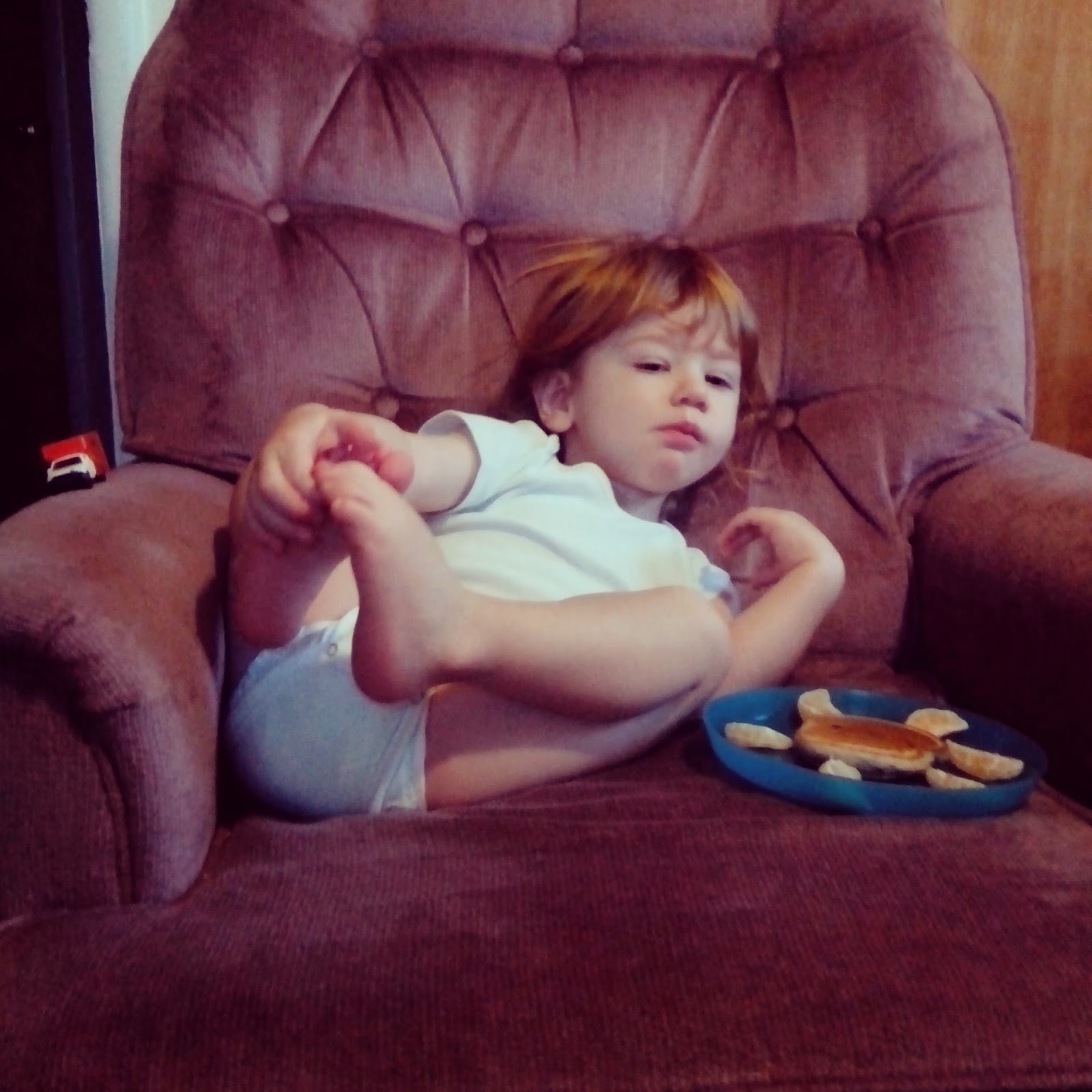 While he was watching his movie, I got his first gift ready: dinosaur bedding.  As soon as he was finished dancing to the music during the credits of his movie, I told him there was a surprise in his room, so he let me hold his hand and walk him in.  When I pointed out the dinosaurs he went crazy.  It was an even better reaction than I'd hoped for, and I'm so glad that I took pictures of it. 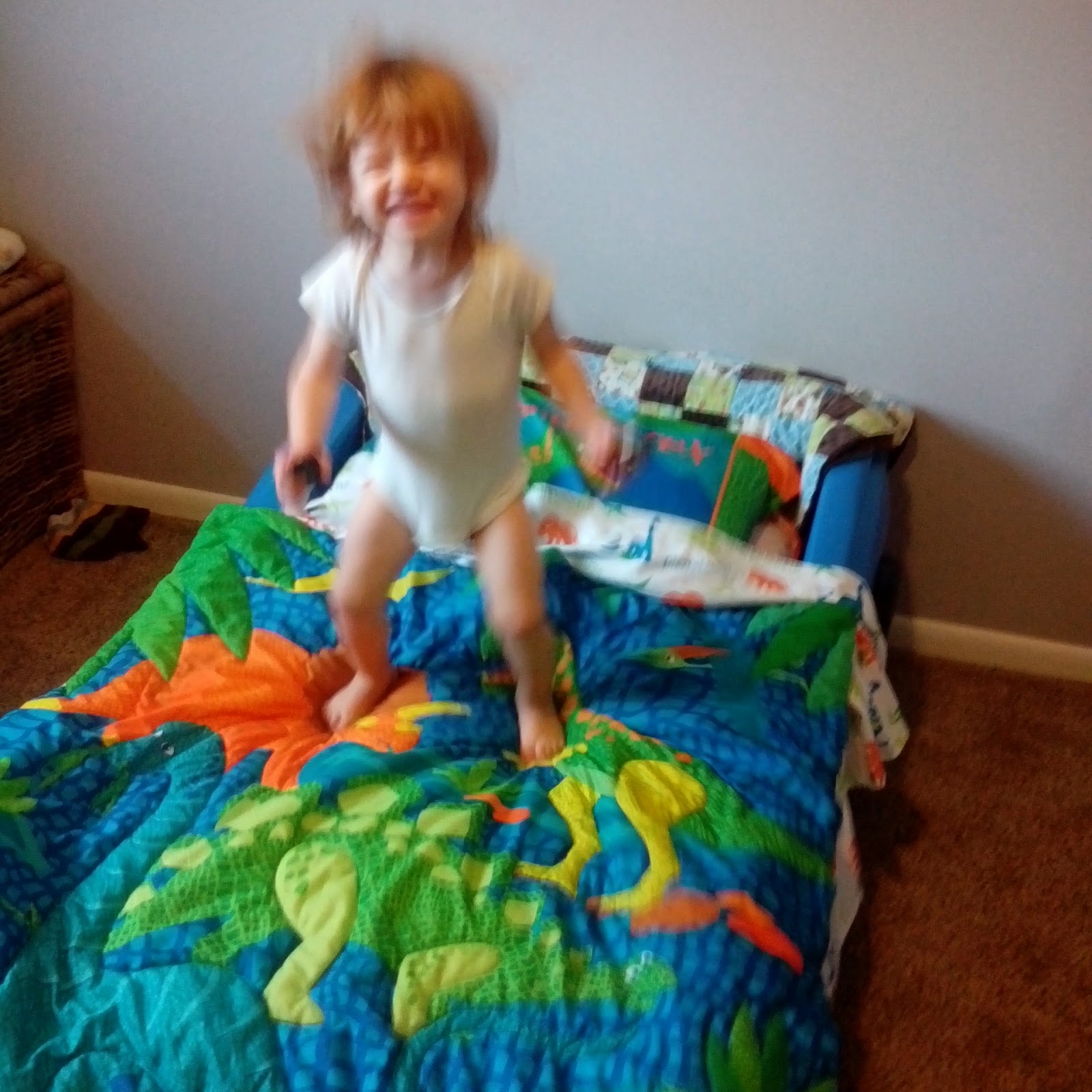 I had to run an errand at the mall, which he is usually ok with.  But he ALWAYS runs to the candy machines and asks me for "pennies.". Until this very day I had always just told him I didn't have any pennies.  But it was a special day, so I came prepared!  He was shocked and so excited to get some candy.  He chose the little dog bones, this was his way of thanking me after putting the first one in his mouth.  I kept the rest in my pocket and gave him two at a time until they were gone, which was after we left the mall.  There has never been a smoother shopping trip in our history of shopping together. 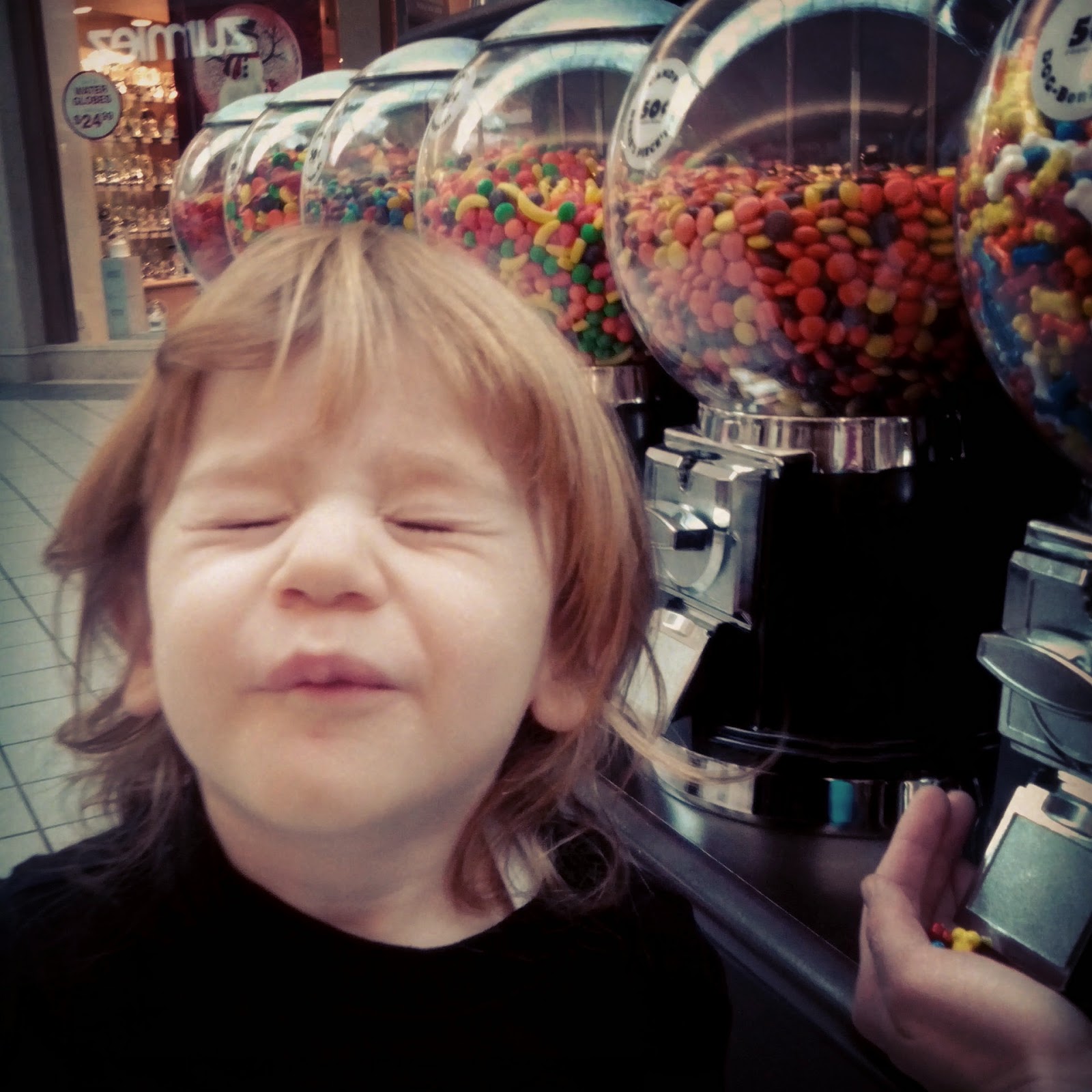 I really wanted to pack the day full of fun activities, but didn't want to break the bank, so I decided to take him to the Hill Air Force Base Aerospace Museum, which is free.  Richard took him there once, but it was close to nap time and didn't last super long.  Marty remembered it, though, and he'd asked to go back a bunch of times.  It was a hit.  His favorite were the "big guys." 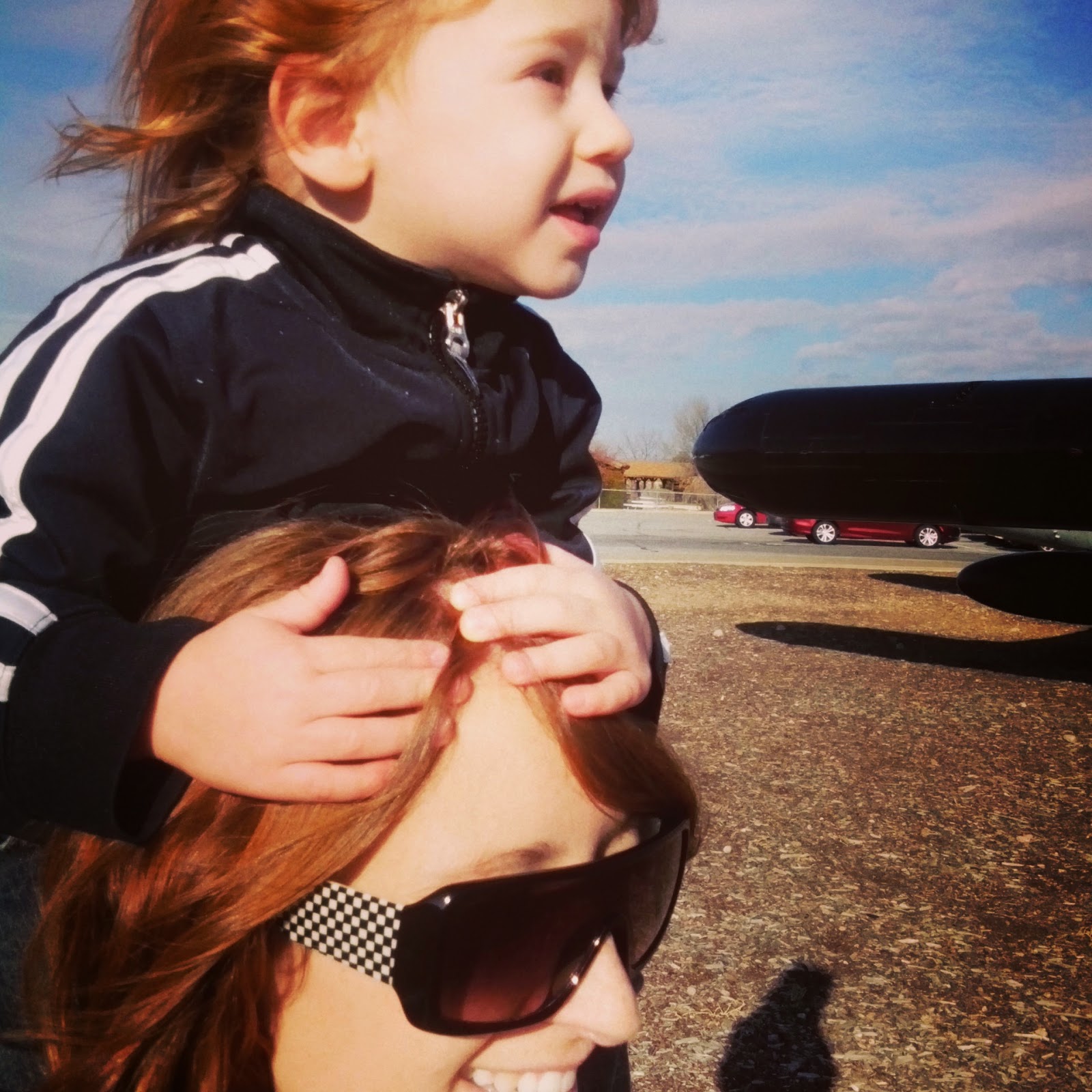 We went home for lunch, and my mom came over to surprise Marty with balloons.  He loved them.  And he loved showing her his dinosaur bedding.  Richard came home while the birthday boy was napping, and we actually had to wake him from his nap to head out for his big birthday adventure on time.  Waking him is never an easy thing to do, nor does it ever yield very positive results.  This day was no different, and I'm not sure why we thought it would be just because it was his birthday.  But Richard had come up with the really great idea to ride the FrontRunner to Farmington and take the boy to see a movie., and because it was such a fun idea I got super excited about it.  So that is why we woke him from a dead sleep on his birthday.
Although this picture doesn't show it well, Marty really did love being on the train.  He didn't really show us by smiling, but rather in getting pretty upset when we had to get off.  But then we watched the train drive away and he got excited. 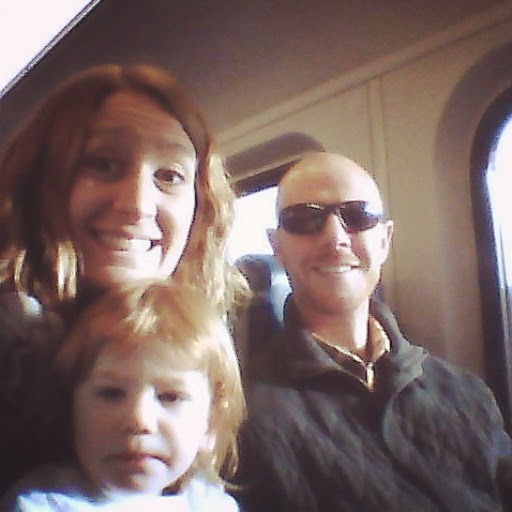 I seriously think that it was when the clock struck 4:17 pm, and our son turned two years old that he threw the biggest and craziest tantrum he has ever thrown in his lifetime (up to that point - I'm sure he's surpassed it by now).  He wanted to run right out into the middle of the street, into oncoming traffic, but we wouldn't let him, so of course he had a meltdown.  He calmed down quite a bit once we got to the fountain.  We'd never been so grateful for water set to music. 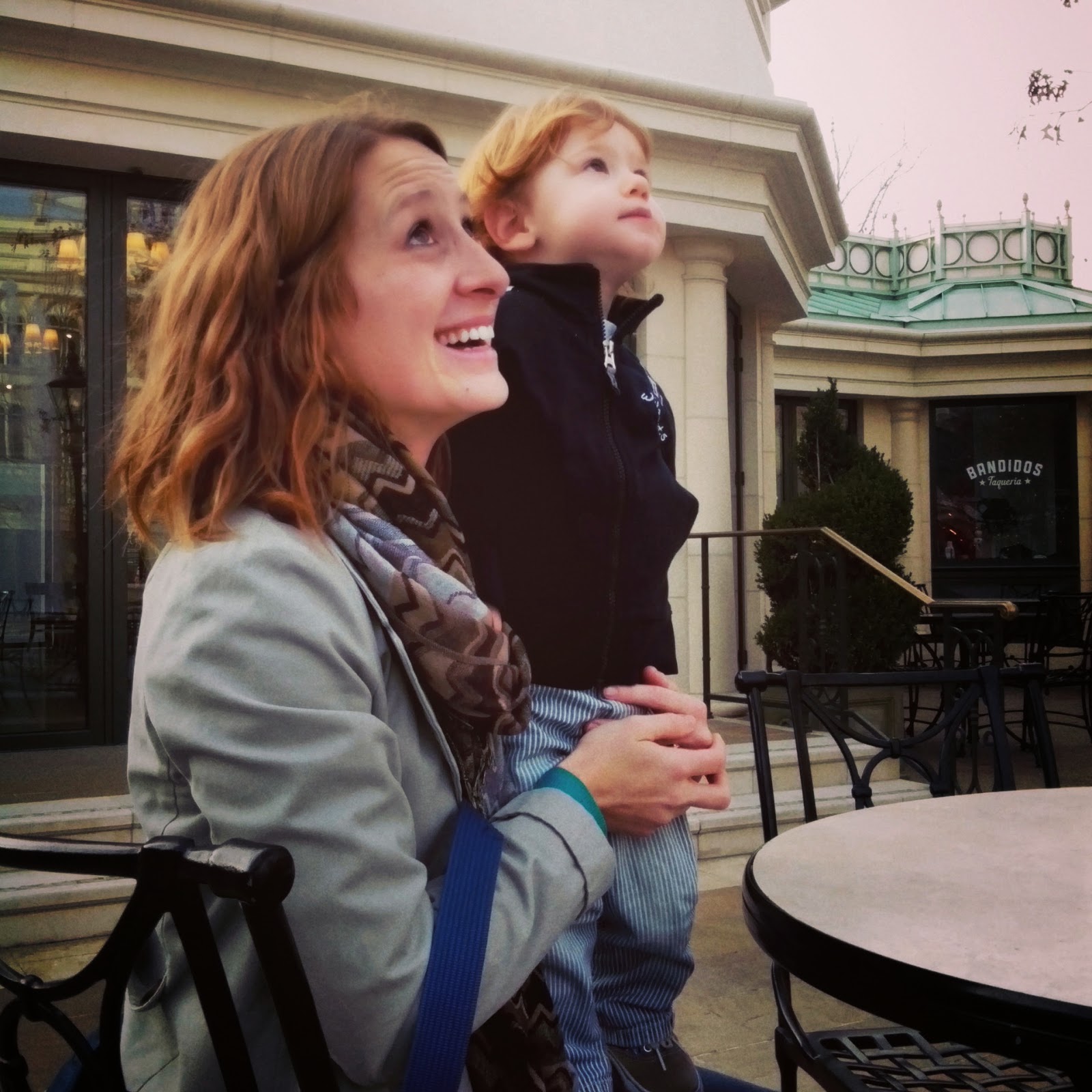 We had a little bit of time to kill before the movie started, so we dropped by Madbrook and got a birthday treat.  I was confused when Richard said he didn't want a donut, but when Marty only ate the sprinkles off of his and Richard ate the rest, I realized that had been his plan all along. 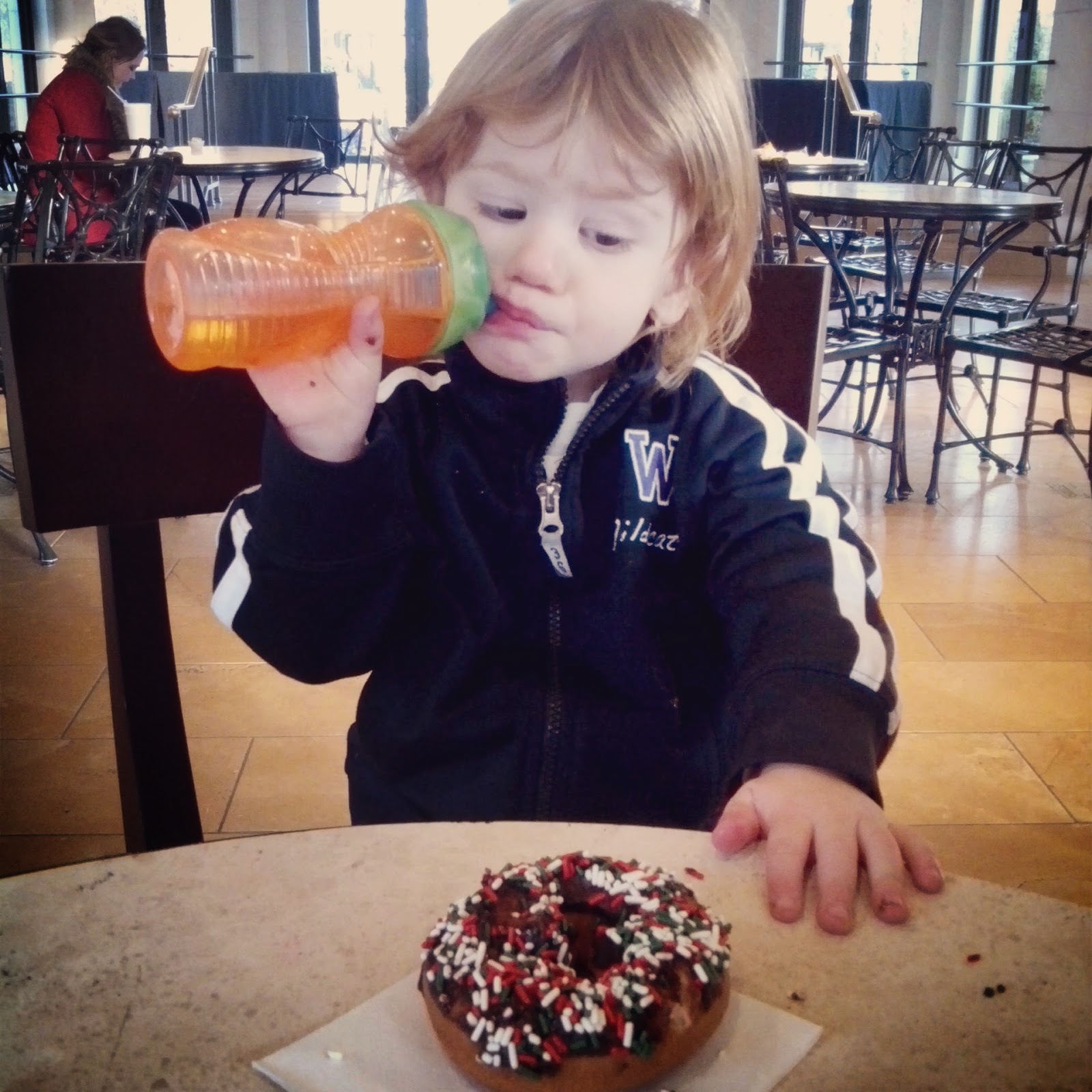 We went to see "The Penguins of Madagascar," and we all loved it.  Marty especially.  When the movie was over, we went back outside to watch the fountains again before meeting up with Grandma and Grandpa and Sarah for dinner.  Marty gave Richard this mischievous little look, as if to say, "Get ready, Dad...". And then as we walked to dinner at the other end of the shopping center he proceeded to have many small versions of the previously mentioned meltdown. 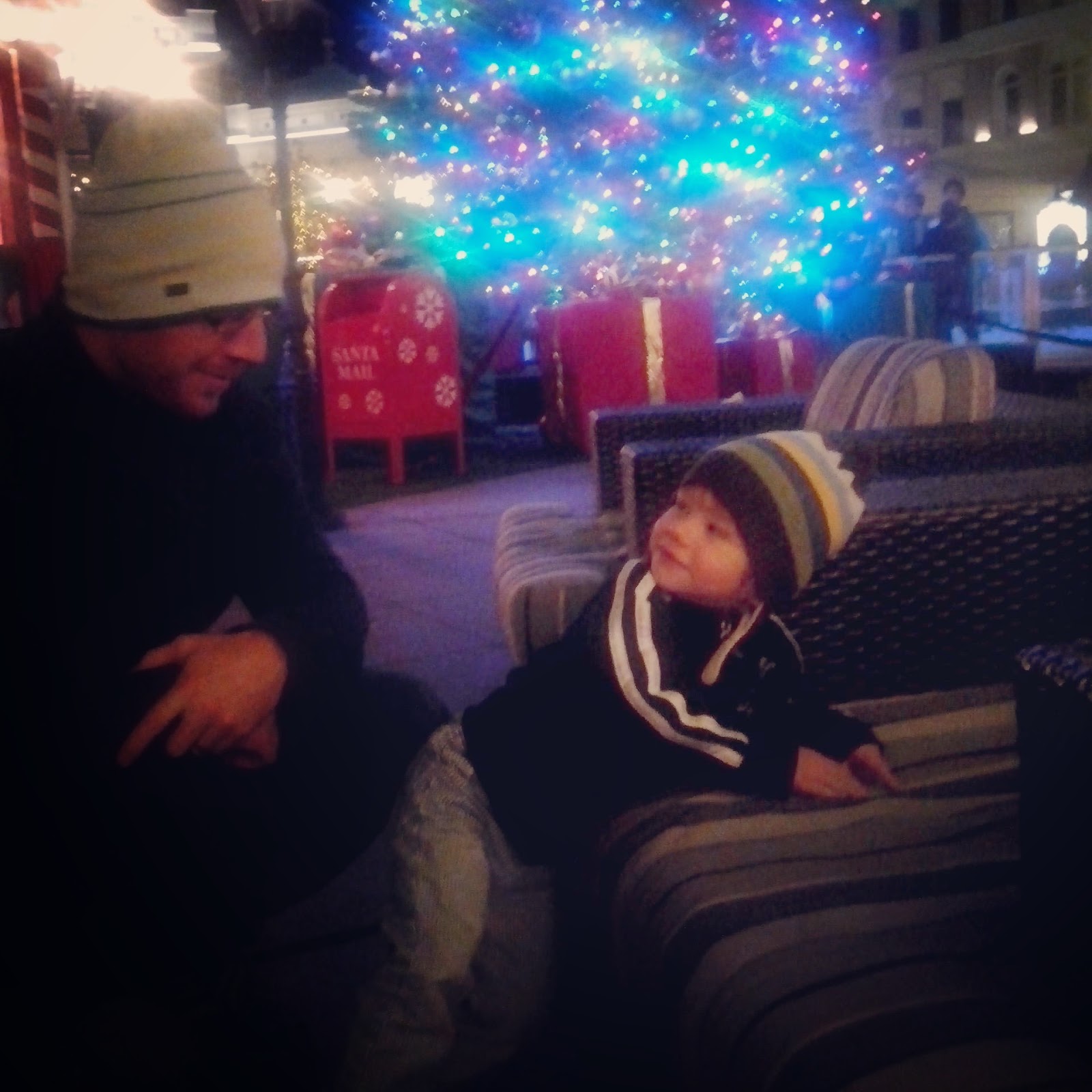 He took a quick break from screaming his head off as we tried to save him from sprinting into the road to run a few laps around the clothing racks in a department store, and then he got right back to business. 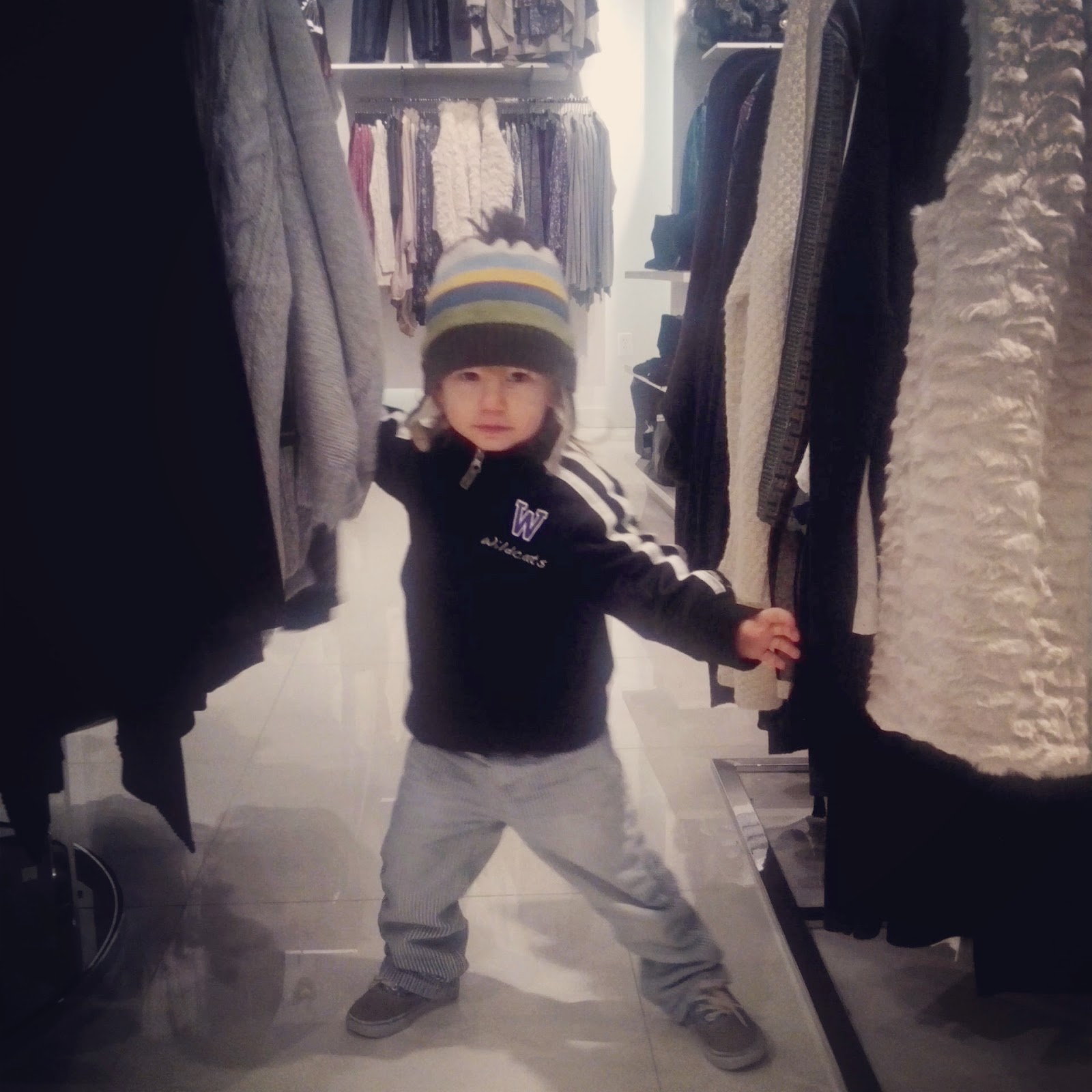 We finally made it to dinner, where we had to just laugh as we told everyone what had just happened so that we didn't end up crying about it instead.﻿ 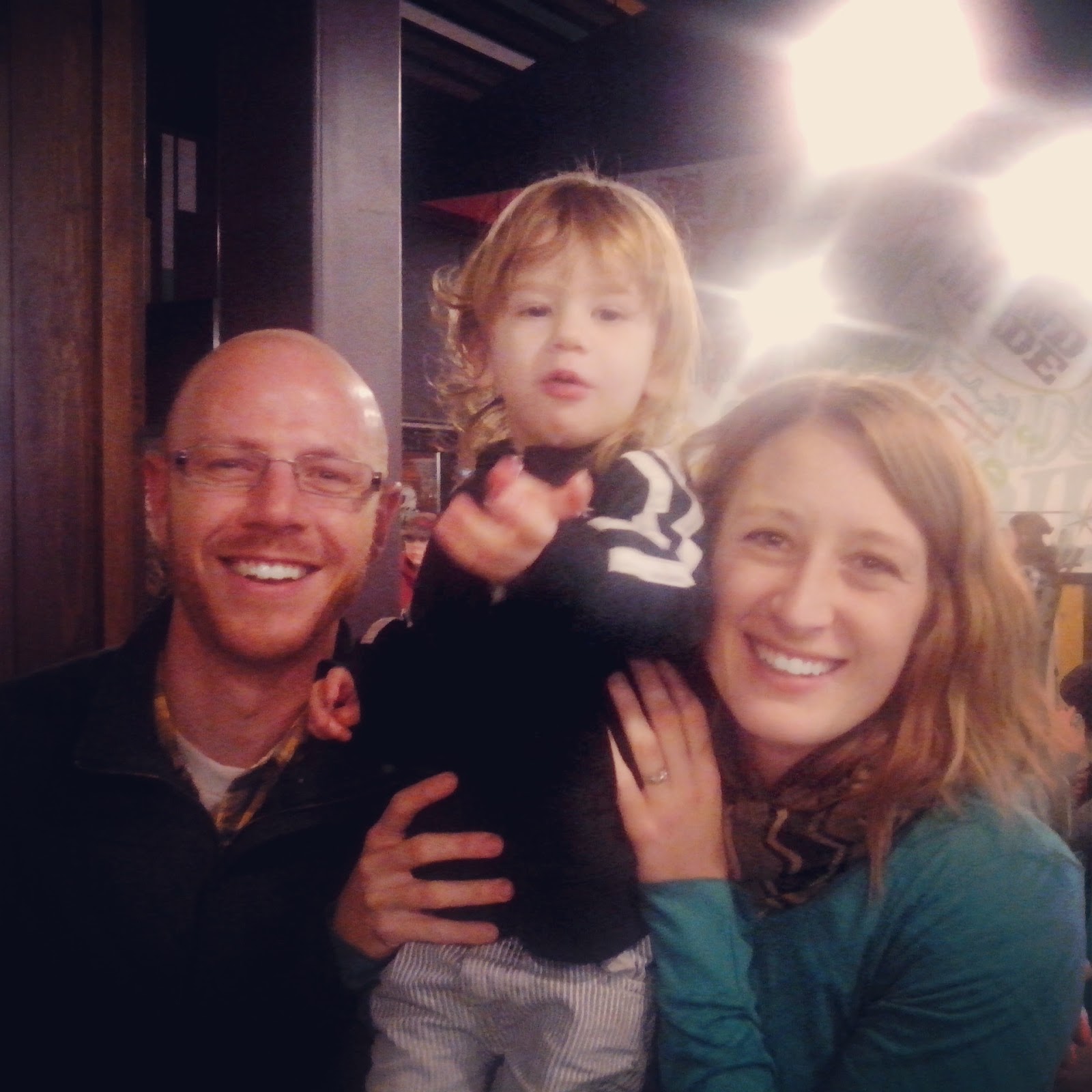 We had a little time left between dinner and when our return train would arrive, so we decided to cap things off with some frozen yogurt.  It's not a birthday without ice cream!
We rode home on the train with a boatload of youth who had come down from Idaho to see the lights at Temple Square, and Marty was wary enough of the train full of strangers that he stayed on our laps the entire time.  He showed a bit more enthusiasm on our return trip, but we were all so tired that none of us put up a fight when it was time to get off.
When we got home we brushed teeth, got in our jammies, and ended the night like we always do, with stories and snuggles. 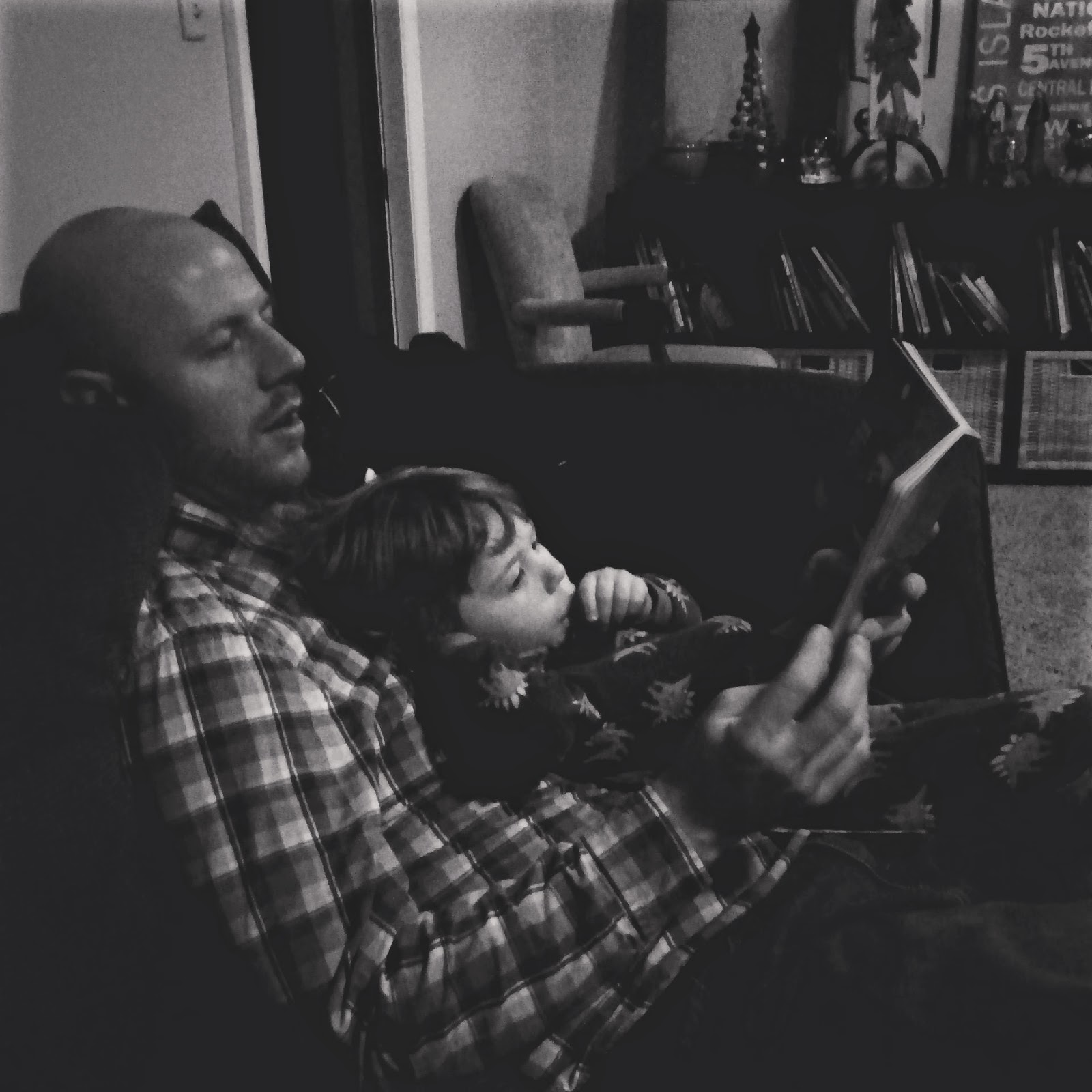 We may have packed a little too much into one day of celebrating, and we really should have known better than to wake up our little sleeping beauty, but even when I think about those holy fits he threw I think it was one of the best days.  Ever.  We made a lot of memories, and we got to make a big deal about our favorite person in the world.  And there's nothing better than that.